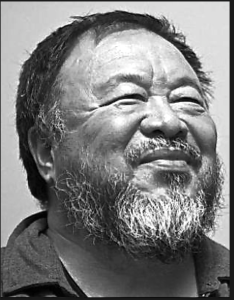 Ai Weiwei is a Chinese conceptual artist and a social activist. His work encompasses diverse fields including fine arts, curating, architecture and social criticism. Born in Beijing in 1957 as son of the famous poet and activist Ai Quing. The family had to move to Xinjiang between 1960 and 1976. As one of the first students able to study abroad Ai Weiwei relocated to the United States in 1981 and lived there until 1993.  He began creating conceptual art by altering readymade objects. During his time in New York (1983-1993)  Weiwei consistently documented the people with whom he interacted, events he witnessed, and the progress of his own work. These images later became the series known as the New York Photographs.

From his early beginning his artworks are created as concept art, whereby he usually let realize his ideas on a large scale (see his cooperation with Herzog & de Meuron for the olympic station Being, called the Bird nest).  His commitment to human rights and his indications of gross problems in China (see the Cover books) have brought him into conflict with the Chinese authorities several times, but at the same time made him a world-famous social activist. Ai Weiwei currently resides and works in Beijing, Berlin and London.