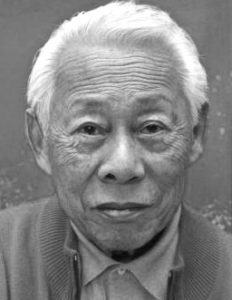 Zao Wou-Ki (pinyin: Zhào Wújí) born in 1920, was a Chinese-French painter, later he became a member of the Académie des Beaux-Arts in Paris. Zao Wou-Ki received his formal training at the School of Fine Arts in Hangzou, where he was exposed to both Eastern and Western academic traditions. Frustrated by the restrictive formalism of Chinese painting, he departed for Paris in 1948 and immersed himself in the art of the European avant-garde. His earliest exhibitions in France were met with praise from Joan Miró and Pablo Picasso.In 1957, Zao decided to visit the United States where his younger brother Chao Wu-Wai was living in Montclair, New Jersey, close to the art scene of New York City. He wanted to learn more about “pop art”.

He left the U.S. after a six-week stay, traveling to Tokyo and then to Hong Kong.

Zao’s work,   He describes them with the date in which he finishes them. He uses masses of colours to materialise a creating world, where light structures the canvas. He worked formats in triptychs and diptychs. While his work was stylistically similar to the Abstract Expressionists whom he met while travelling in New York, he was deeply influenced by Impressionism. Zao Wou-Ki died on 9 April 2013 at his home in Switzerland.