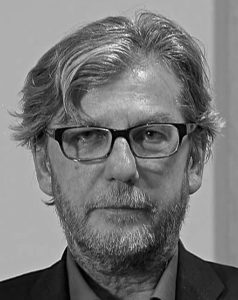 Thomas Ruff, born 1958 in Zell am Harmersbach, Schwarzwald, lives and works in Düsseldorf. He studied photography from 1977 to 1985 with Bernd and Hilla Becher at the Kunstakademie Düsseldorf.

Walker Evans, Eugène Atget, Karl Blossfeldt, Stephen Shore and William Eggleston also influence Ruff. In 1999, he became professor of photography at the Staatliche Kunstakademie in Düsseldorf and from 2000 to 2006, he was responsible for the class of photography, the former Becher class, which is described as a significant group of photographic art under the name Düsseldorfer Fotoschule.

Ruff has been described as “a master of edited and reimagined images”. Also educated and influenced by the Becher couple, his style can be compared in some parts with the photographic work of Heinz-Günter Mebusch and i.a. the digital images of Michael Jansen. He became a member of a prominent generation of European photographers also like Thomas Struth, Andreas Gursky