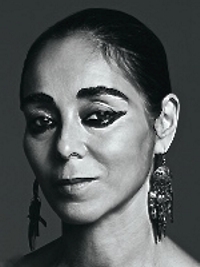 Shirin Neshat (شیرین نشاط‎‎) born 1957 in Qazvin (Iran) is an Iranian visual artist who lives in New York City. She got known primarily for her work in film, video and photography. Her artwork centers on the contrasts between Islam and the West, femininity and masculinity, public life and private life, antiquity and modernity, and bridging the spaces between these subjects.

Neshat has been recognized countless times for her work, from winning the International Award of the XLVIII Venice Biennale in 1999 to winning the Silver Lion for best director at the 66th Venice Film Festival in 2009.

Neshat is the fourth of five children of wealthy parents, brought up in the religious town of Qazvin in north-western Iran under a “very warm, supportive Muslim family environment”, where she learned traditional religious values through her maternal grandparents. Neshat’s father was a physician and her mother a housewife. Neshat said that her father “fantasized about the west, romanticized the west, and slowly rejected all of his own values; both her parents did. What happened, I think, was that their identity slowly dissolved, they exchanged it for comfort.

As a part of Neshat’s ‘Westernization’ she was enrolled in a Catholic boarding school in Tehran. Through her father’s acceptance of Western ideologies came an acceptance of a form of western feminism. Neshat’s father encouraged each of his daughters to be an individual, to take risks and he sent his daughters as well as his sons to college to receive their higher education.

In 1975, Neshat left Iran to study art at UC Berkeley.

It was only until 1993 that Neshat began seriously to make art again, the first of which being her photographs. She started her passion for art again, made her think deeply about herself and what she wanted to create as an artist. In 2006 she was awarded , one of the richest prizes in the arts, given annually to “a man or woman who has made an outstanding contribution to the beauty of the world and to mankind’s enjoyment and understanding of life.”