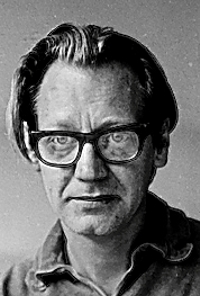 Nicholas Krushenick, 1929 – 1999 in NYC, was an American abstract painter whose artistic style straddled the line between Op Art, Pop Art, Abstract Expressionism, Minimalism and Color Field. He was active in the New York art scene in the 1960s and 1970s, before he withdrew and focused his time as a professor at the University of Maryland for almost thirty years until his death in 1999.

Initially experimenting with a more Abstract Expressionist inspired style and cut paper collage, Krushenick is more well known for his paintings which use bold Liquitex colours and juxtaposing black lines, which fall under the category of pop abstraction. In fact, he is a singular figure within that style.