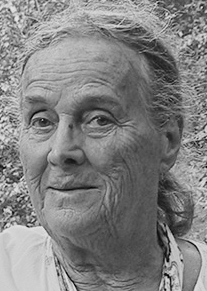 Mary Bauermeister, born 1934 in Frankfurt a.M., was one of the defining figures of the avant-garde scene in the Rhineland in the early 1960s and is an internationally known artist. Her studio in Cologne was a center of the new arts, both in music as well as in art and architecture.

The visitors and contributors in this open studio belong to the Who’s Who of the experimental movements in art, literature and music: Nam June Paik, John Cage, Hans G. Helms, Merce Cunningham, Otto Piene, Heinz Mack, Ben Patterson and many others. They came to her studio for concerts, readings, exhibitions and performances and turned it into a lively platform for happenings and experimental art. Bauermeister’s intermediary art led to her first major solo exhibition at the Stedelijk Museum in Amsterdam in 1962. She then went to New York in the same year, together with Karlheinz Stockhausen, who had met her in Cologne in 1957 and they married in 1967. Soon she became part of the New York art scene and she was very successful. Important museums, including the MoMA, the Guggenheim and the Whitney in New York, as well as the Hirshhorn Museum in Washington, have collected her work.