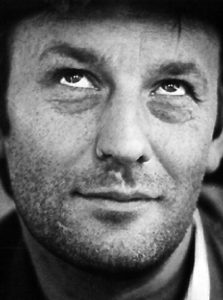 Martin Kippenberger, born 1953 in Dortmund I died 1997 in Vienna, was a German artist and sculptor known for his extremely prolific output in a wide range of styles and media, superfiction as well as his provocative, jocular and hard-drinking public persona.

Kippenberger was “widely regarded as one of the most talented German artists of his generation,”[1] according to Roberta Smith of the New York Times. He was at the center of a generation of German enfants terribles including Albert Oehlen, Markus Oehlen, Werner Büttner, Georg Herold, Dieter Göls, and Günther Förg.Kippenberger’s refusal to adopt a specific style and medium in which to disseminate his images resulted in an extremely prolific and varied oeuvre which includes an amalgam of sculpture, paintings, works on paper, photographs, installations, prints and ephemera.

In 1985, Kippenberger exhibited “Buying America and Selling El Salvador” at Metro Pictures Ltd in New York. Although he had his first museum exhibition at Hessisches Landesmuseum in Darmstadt in 1986, he drew greater attention from institutions outside Germany, with exhibitions at the Centre Pompidou in Paris and the Museum Boijmans Van Beuningen in Rotterdam.

Kippenberger’s artistic reputation and influence has grown since his death. In 2003, he represented posthum Germany at the Venice Biennale . He has since been the subject of a several large retrospective exhibitions, including at the Tate Modern, the Museum of Contemporary Art Los Angeles, the Museum of Modern Art New York, Museo Picasso Malaga.

Kippenberger collected and commissioned work by many of his peers: some of his exhibition posters were designed by such prominent artists as Jeff Koons, Christopher Wool, Rosemarie Trockel and Mike Kelley.