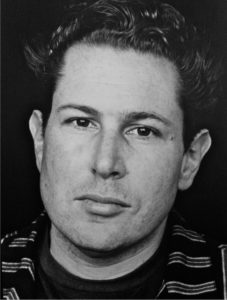 Julian Schnabel, born 1951 in Brooklyn, New York is a painter and filmmaker (i.a.Basquiat). Julian Schnabel’s first solo exhibition was held at the Contemporary Arts Museum Houston in 1976. However, his rise to prominence occurred a few years later following two exhibitions at the Mary Boone Gallery in New York, in which he established a new narrative style for painting. His style is characterised by very large scale paintings. He uses diverse materials such as plaster, wax, photographs, antlers, velvet and ceramics. Schnabel’s work has been exhibited throughout the world and he has had retrospectives at the Tate London (1983), the Whitney Museum of American Art (1987), Centre Georges Pompidou Paris (1987), Kunsthalle Düsseldorf (1987), Schirn Kunsthalle Frankurt (2004), Museo Correr, Venice (2011), and other museums. Schnabel has directed movies, Basquiat (1996), Before Night Falls (2000), The Diving Bell and the Butterfly (2007), Lou Reed’s Berlin (2007), Miral (2011) and At Eternity’s Gate (2ß18). He won the award for Best Director at both the Cannes Film Festival and the Golden Globe Awards, which also led to an Academy Award nomination in the same category. Julian Schnabel lives and works in New York and in Montauk, Long Island.