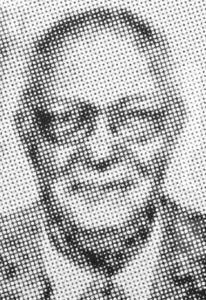 John Moore, birthname John Constantin Brancusi Moore (born 1934 in London, died 2016 in Paris) was an English-French photographer, sculptor and designer. Moore was born as the son of the New Zealand pianist and music philosopher Vera Moore (the most important Schumann-interpretor of her time) and the famous Romanian-French sculptor and photographer Constantin Brancusi. He spent most of his schooling in a private boarding school near London. After an apprenticeship as an electrical engineer, he had been a professional in motor sports for over a decade. However, he also followed the advice of his parents and his godparents Helen Christian Sutherland (collector and patron) and Jim Ede (collector and curator of the Tate Gallery of Modern Art) and turned to art. As an autodidact, and still on the instructions of his father, transmitted by his mother, and other artist friends, he learned photo technics and how to use light. Undoubtedly he inherited the talent for sculptural work and photography from his father, later he was more concentrated on the development of color photography. He understood photography as the appropriate contemporary medium and important to use it as an artist.

After the death of his father in 1957, who did not legitimate him officially, he was increasingly looking for distraction by dolce vita. Through his lifelong friendship and collaboration with Alain Bernardin, international entertainment entrepreneur and i.a. founder of Crazy Horse Paris, nude photography has been a major part of his work since 1959. There are concepts for performances with light and color projections, some of which were realized at the Crazy Horse. He traveled with Bernadin the world, but he was also dedicated to the development of phototechnology in cooperation with Kodak and Agfa. Between 1986 and 1994 he made numerous photoshootings with Lova Moor, the legendary dancer of the Crazy Horse, and other dancers. After Bernardin’s suicide in 1994 and the early death of his second wife, only a little bit later, he retired completely to his country seat near Paris and finished his work as a photo artist for a short periode. During this time and later on, he was more and more concentrated on (art-) philosophical studies. He lived very withdrawn until his death and explored intensively what was essential to him in art and life. Very slowly he re-engaged in his photographic work, now in a way more focused on the image than of the situation, by phototechnical and digital transformation of his own existing work. Characteristic became at last his individual style liberating photography from technical borders to create just the best ‘light-drawing’. Like the conceptual photographer Heinz-Günter Mebusch, who met him a few times end of the 80ties, he started in the 90ties again to give more space to experiment. The search for a higher degree of abstraction led to new subjects.  His fascination with the formation of light and his independence from temporal styles enabled him to create new images.