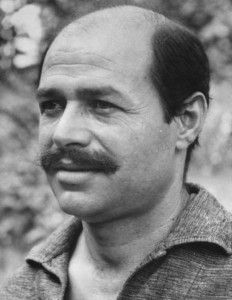 The German flag, that was waving in the wind upon the sacred rock of Acropolis since April 1941, was replaced by the Greek one in October 1944, signaling officially the national liberation. During this very year, the twenty-one-year old Giannis Gaitis, who registered at the Athens School of Fine Arts as a student of Konstantin Parthenis in 1942, presented his paintings to a narrow circle of intellectual friends. Despite the fact that the calamity of the civil war came to complement the trials of Greece after the occupation, Gaitis continued to exhibit every year, from 1944 to 1947 systematically, at the Philological Society of Parnassos, one of the few exhibition-halls in the tormented and exhausted city of Athens.

Giannis Gaitis (Γιάννης Γαΐτης), born 1923 in Athens, where he died in 1984, was a Greek painter, engraver and sculptor. He had a studio in Paris for the last 26 years of his life.

Gaitis is known for his “Men”, with forms that do not have individual characteristics and are dressed in striped clothes and a hat, as a protest for the mass of modern man. Even before graduating from the School of Fine Arts (ASAC) in 1954, Gaitis had demonstrated his intense individuality by his exhibiting activities, as well as by the style of his painting that, being relatively bold, strayed from the usual, outmoded academic tendency. In Paris he studied on and was confronted with art informel, a movement responding to American abstract expressionism, that had snatched the torch from the French capital and had led New York into the international artistic limelight. At the beginning of the following decade, Gaitis moulds with the same gestural, sculpted approach a personal vocabulary of pictorial codes, gradually standardizing and embodying them into the sphere of an imaginary, ecological microcosm. He gives shape to his own extraterrestrial homunculi and interweaves them with mundane ants, frogs, roosters, pigeons and flowers.

During this stage of his work we detect the first traces of pop art’s influence. The formalistic repetition, a basic feature similar to Andy Warhol’s art, marks the painting of Gaitis from then on and up to his death. However, the Greek artist does not attempt, at this period, to render the spirit of consumer society and popular mass culture by means of a morphological uniformity. Instead, he settled on a particular pictorial alphabet, which he recomposes so as to express a different comment each time. In certain paintings appears also the cinematographical depiction of two-dimensional space in different zones, as we encounter it in the representation of Roy Lichtenstein’s comics. Gaitis’ main interest is the visual way of relating a narrative as well as its gradual, successive reading and notional decoding.

It is this anecdotal narration that differentiates Gaitis from pop art’s static symbols, frozen in the dimension of time, while it brings him nearer to the ideology of Nouvelle Figuration (1960-1979). Besides, in 1964 he co-exhibited with this group under the name Actions et Reflexions, in Paris at the Galerie “A”.

Gaitis gradually creates a language of communication, easy to understand, that allows him to make active comments on the daily actualities, announcing openly his liberal views. Giannis Gaitis’ paintings from 1945 to 1967 is mostly unknown to the general public

It was about 1967, as the dictatorship of the colonels, the Junta,  was set up in Greece, for the first time in his paintings appeared the famous expressionistic human profile with the hat as a standing up against suppression. This motif he went to simplify and geometricalize exceedingly turning it into the trade-mark of his typical work, which made him an important greek and international pop artist. The metaphor for anonymous men depicting the uniformity and sterility of mass living.