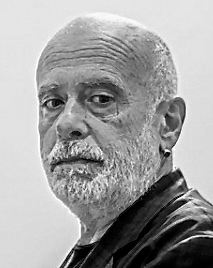 Acting as a dark shaman of the post-modern era while reacting against the dominance of increasing abstraction in preceding generations, Clemente helped reinvigorate painting by using recognizable human figures as his primary subject. In idiosyncratic and arresting images, he uses neo-expressionist techniques to represent late twentieth century people and their psychological conditions – fundamentally questioning what is real and what is of value to the human spirit. He has channeled his interests in literature, music, and film and blended them with philosophical ideas, signs and symbols drawn from other cultures (Hindu spiritualism in India, Tarot, and the Candomble religion of Brazil). His diverse approaches to making art have resulted to works that have decorated nightclubs and hotels, as well as gallery and museum walls.

Francesco Clemente was born in 1952 in Naples into a family with aristocratic roots. After writing poetry and painting as a child, he went to Rome to study architecture at the Università degli Studi di Roma, La Sapienza, in 1970. Leaving school before completing the program, he focused instead on art.

Although he came of age when Arte Povera and Conceptual Art were in vogue, Clemente concentrated on representation in works on paper. His first solo exhibition was at the Galleria Valle Giulia in Rome in 1971. After meeting Alighiero e Boetti in Rome in 1972, Clemente traveled with the artist in Afghanistan. In 1973, Clemente first visited India, a country to which he would return again and again, often summering there. In 1974, he met Alba Primiceri, a theater actress, and married her lateron. She would become a frequent subject of his art. In 1976 and 1977, Clemente spent time at Madras’s Theosophical Society, where he delved into its library of religious and spiritual texts. His interest in Hindu spiritual life and in other non-European cultures was combined with an enthusiasm for local popular culture and crafts. Clemente began collaborating with Indian sign painters, miniaturists, and papermakers, as in ‚Francesco Clemente Pinxit’, a 1980–81 series of miniatures in gouache on handmade paper, for which young miniaturists from Jaipur and Orissa painted the decorative elements.

He continued making drawings and other works on paper in the 1970s, pursuing what would become his signature subjects: the human form, particularly women’s bodies; his own image; sexuality; myth and spirituality; non-Western symbols; and dreamlike visions. Clemente’s participation in the 1980 Venice Biennale brought him international attention. He collaborated with Andy Warhol and Jean-Michel Basquiat on a group of works. While Clemente was working on a large scale, he simultaneously developed various book projects, including three unique works created with Beat poet Allen Ginsberg.

In 2008, Clemente further explored his interest in collaborating with performing arts projects when he exhibited portraits of eight stars in the concurrent season at the Metropolitan Opera in an exhibition entitled The Sopranos at the Arnold and Marie Schwartz Gallery Met in New York.