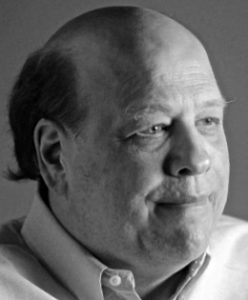 Ford Beckman was born 1952 in Columbus, Ohio; he died in 2014. He is best known for his Black Wall Paintings and his Pop Paintings, in which Beckman overpainted screen prints of clowns. He had cooperated with Heinz-Günter Mebusch for his portrait series. The image of the human condition between life, disappearance and hope forms the central theme in the work of Ford Beckman. In 1991, Beckman changed his artistic strategy, beginning with abstract works, using yellow, black and white. Beckman let the colours fall onto the canvas, similar to the "Dripping" pictures of Pollock, and created shapes that spread with a lot of energy from every point on the painting. Beckman had lived in New York and New Canaan, Connecticut.

He died in Tulsa 2014. Beckman’s works can be found in the Whitney Museum of American Art in New York City; the Museum of Contemporary Art in Los Angeles; the San Francisco Museum of Modern Art; the Saatchi Collection in London; the Essl Collection in Vienna; Artforum collection and the Panza Collection in Italy.