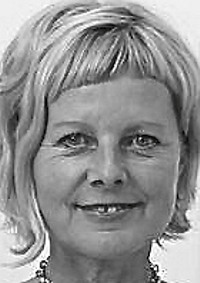 Cornelia Schleime was born in East Berlin in 1953. From 1970 to 1975, she completed a barber’s apprenticeship and a masters education, before she began her studies of painting and graphic arts at the Dresden Academy of Fine Arts in 1975 after an episode as a nursing assistant. With her horizon pictures (ink on Japanese paper), she ignored the tradition of the Dresden painting school. Cornelia Schleime was looking for expressions that were adequate to her own life. It was important for her to have the constant process of painting and drawing herself. Painting began (and begins today) for her with the “scratching, scratching and marking.” Cornelia Schleime installed in the autumn of 1979 in the former studio house of the Dresdner Spätromantiker Eduard Leonhardi a space of the poet. The participation in this exhibition and their body actions resulted in a ban on exhibitions in 1981. From the art concept of the association functionaries, which was too narrow for her, she drew the consistency and made an exit application to West Berlin. Cornelia Schleime founded the punk band in 1979. In September 1984, the artist switched from East to West Berlin. In connection with this departure from the GDR almost the entire oeuvre created so far disappeared. Years later Schleime learned from her Stasi files, who had spied and betrayed her over the years, this was her former best friend.

Her overpainting of postcards and art reproductions is an examination of the picture media and their reproducibility. With minimal interventions, she made extensive context shifts and transformed mass goods into unique works. Since 2000, she has been a member of the Saxon Academy of the Arts in Dresden. In 2004 she received the Gabriele Münter Prize, Fred Thieler Prize and Hannah Höch Prize.